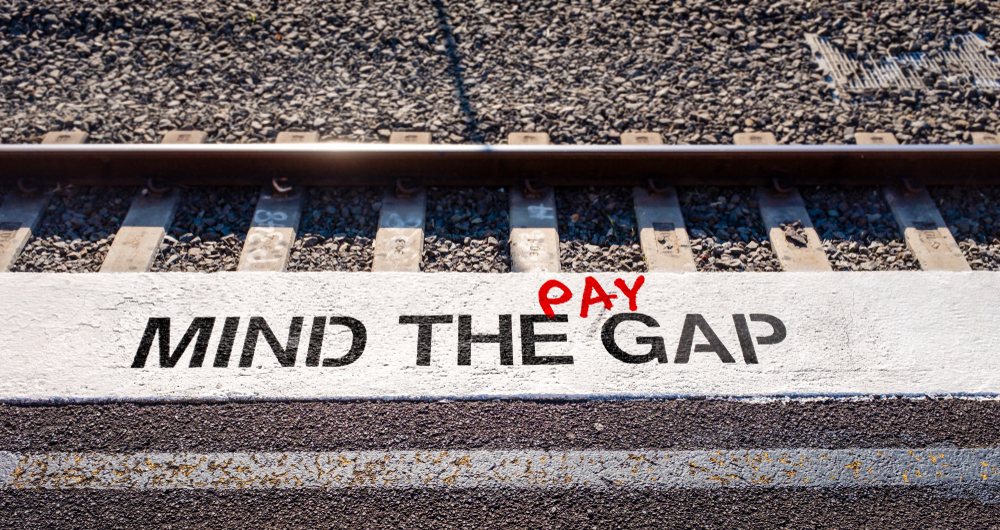 Today is Equal Pay Day – I Mind the Gap

I have mixed feelings about gaps.

The gap edging the Kaibab Plateau – a.k.a the Grand Canyon – is stunning, The Gap at the mall is not. Samuel L. Jackson has a gap in his teeth – but so does Mike Tyson. Right now, I have to keep a six-foot gap between me and other people, which as an extrovert is figuratively killing me. On the other hand, given my compromised immune system, that gap may be the only thing keeping me alive.

Certainly, some things about how I “mind the gap” have changed since my transition. A decade ago, wearing size-12 hiking boots, I never once worried about my gunboats getting caught between the train and platform when boarding the subway. Last Christmas in New York, however, I nearly lost a D’Orsay pump under the A Train to Brooklyn.

As a teacher – even as a male one – I was keenly aware that it was no coincidence that in a profession dominated by women, that we made only 81% of what comparable professionals with a similar education took home each year. That the gender wage gap for white women is 82% of every dollar paid to men: I don’t think that’s a coincidence, either.

Teachers aren’t alone in this, of course. Although it could be argued for a profession as a whole that teachers are still better off – at least everyone is being treated like the south end of a north-bound camel. Not every profession is so lucky.

(Luck, of course, being a relative term. “Lucky” as in having gotten in a lifeboat off the Titanic. “Lucky” as one is when your house burns down but spares your 17-year-old Honda. Or “lucky” as one must feel if you get COVID-19 in a nation not run by Donald Trump.)

I mention all of this because today, March 31, 2020, is “Equal Pay Day” a date showing how far into this year women needed to work to earn what their male counterparts have earned in the previous year.

An aspirational date, one we hope keeps moving up in the calendar – a calendar that apparently will need to run until 2277. That’s when, according to the World Economic Forum, the wage gap will close. Which, they note, is 55 years longer than the last time they did the calculations. Returning once again to “luck,” I’ll simply say the future’s so bright, I gotta wear shades. (Which are more expensive because of the pink tax.)

At this point it would be easy to get angry about why in a time when women should be moving forward we seem to be going backward. But that would require getting agitated – again – about a nation run by Trump, a man who 82% of his voters said they’d vote for again despite the fact that he’s taking us backward as a country in almost every way imaginable.

Beyond anger, I’ve heard it suggested women should just stay home from work to protest. This ignores two basic facts. First, many women cannot afford to stay home from work, even for one day. Second, when this Coronavirus-induced social distancing finally runs its course, I’m pretty sure no one is going to want to stay home again for any reason for at least seven years. There are dishes there. And laundry.

So what’s the answer? Keep doing the same thing we always have?

Clearly not. It’s been more than a half-century since the The Women’s Strike for Equality, when 50,000 women joined in protest in New York City for, among other things, equal rights in the workplace. With all due respect, that would be pointless now. For one thing, 50,000 people shouldn’t be gathering anywhere right now, especially New York. If I see more than four people together in front of my apartment I start coughing as loudly as I can out the window.

More, however, 400,000 people gathered for similar reasons in New York in 2017, to say nothing of another 4 million around the globe. It was great, I was there, and a lot of great change has resulted.

But still, here we are. We continue to backslide when it comes to women making economic gains in the marketplace. Women who aren’t impacted by the sexism and misogyny that permeate our nation – or refuse to see that they are – may not be the death of us all. But their silent acceptance of the world as it is means that 2257 is getting further away every day. So, at a time like this to say it’s time for those of us who do care to give 100% would just be more stale rhetoric – not to mention a dreadful cliche.

No, now is the time for us to give 82%. Let’s give back to the nation what it continues to give us.

Or what if speech language pathologists only fixed 82% of peoples’ speech impediments? Dieticians and nutritionists only gave instructions on how to meet 82% of a patient’s cholesterol control goals? Or hairdressers, hair-stylists, and cosmetologists only styled 82% of their client’s hair?

We hold nearly half the jobs in the country – which doesn’t even include women who work inside the home. Without women, the American economy would be only three-quarters of what it is today. These are facts.

And it sure as hell isn’t luck.