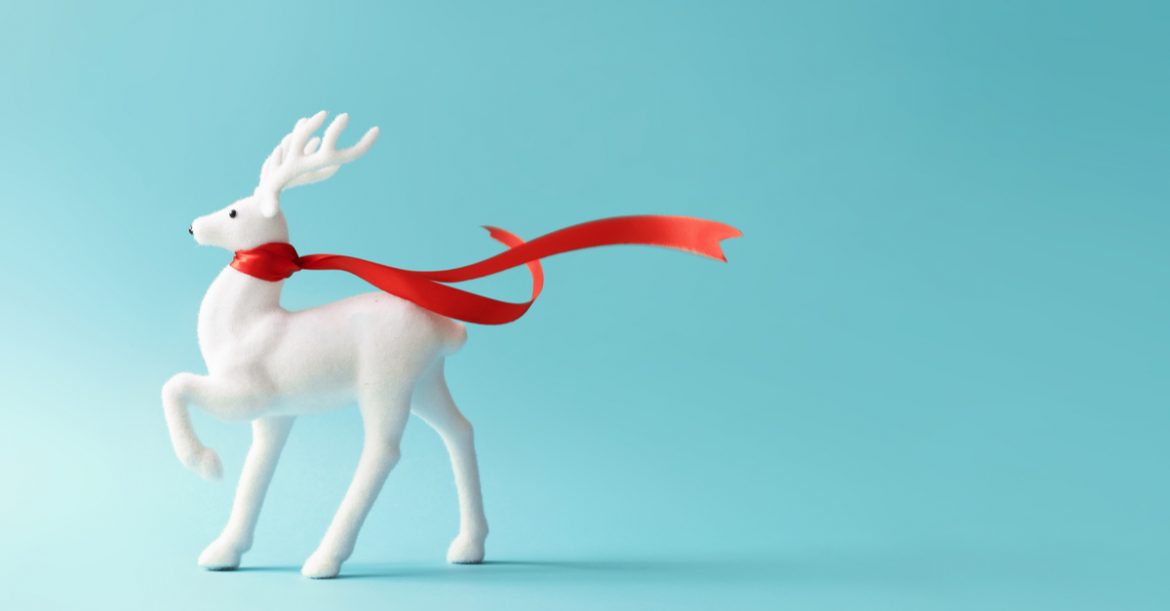 Hey, you kooky Caribou! How goes it? Me and the gang sure miss you, especially at this season. It’s just not the same without you. Yup, it’s that time of year again when we get the goddamned reigns strapped to our haunches and have to drag about 3,000 friggin’ tons of toys clear across the world in 12 hours.

Can you believe we are still doing this crap? Hey, you gotta be happy for a job, especially in this economy. Plus, I’m super grateful for the health benefits. The herd has been in and out of Santaland Clinic a lot this year. Dasher had a herniated disc, Cupid got parasites and Rudolph has gone in for 2 colonoscopies. Plus, turns out everyone here, including the Clauses, is Vitamin D deficient! And I just found out I’m genetically predisposed to having high cholesterol. Thanks, Mom and Dad!

Hey, did you hear that Dancer hooked up with a moose?

It’s not even mating season, but they have been going at it like crazy. You’re missing all the action. We also realized that that Donner is a female! She’s been hiding that well all these years. I guess no one noticed since she was always in the back and, well, ya just couldn’t tell with those extra-large antlers she has. I think Santa knew.

Speaking of which, Santa is borderline diabetic now and no one’s really addressing it. I guess years of cookies and candy canes will do that to ya. I keep telling him to take the carrots and celery that the kids leave out for us reindeer, I sure don’t’ want them.

Who’s been telling everyone that we like carrots and celery?

Where did THAT myth come from? It’s pretty easy to google what reindeer eat. I mean, I know it’s hard to leave out lemmings or willow tree leaves for us, but at least give me a goddamned mushroom once in a while. Maybe that would help my D levels!

Food has been limited around here though what with the climate change. It’s a darn Christmas miracle when I can find enough Lichen and moss to feed the family. There has been a lot of buzz about getting some corporate funding which makes us feel semi hopeful. Thank God for Coca Cola. Did you hear they’re sponsoring the Polar Bears? That company is going to help save this planet. Our Marketing Dept is hoping to reach out to A & W Root Beer for some sponsorship. We figure that the similarity of root beer and rein deer might be catchy. Who knows? I’m pretty sure one of those large caring corporation will come in to help us.

Anyway, Prance, I sure wish you’d come back.

Things just haven’t been the same since you retired. Mrs. Claus has been driving everyone crazy. She is on Facebook non-stop and won’t stop baking gluten free cookies.

Plus, Toby, one of the Elves had his gall bladder out and now ALL the elves want THEIR gall bladders out. It’s been mayhem! Are you sure you can’t come back even for a visit? You had a way with those little folk.

Anyway, I should head off to Zumba class. Santa is trying to make sure we keep up the exercise for the big flight night. He should probably get himself in one of these classes. But he’s nervous about losing too much weight. Bad for the brand.

Comet and Vixen say hi and Dasher told me to tell you he might be calling it quits this year, so you may have a guest at your place come January.

Take care of yourself, old buddy. Hopefully I’ll see you before we all go extinct!

My Ovaries Go for a Ride at FAO...

#OurStoreToo – If Your Store Got Robbed, It...